St. Paisius Monastery is an English-speaking monastery dedicated to St. Paisius (Velichkovsky), whose notable translation works brought the Philokalic teaching to Russia, generating a significant revival in monastic life there, most notably at Optina Monastery.

St. Paisius had lived for seventeen years on Mount Athos, founding the Skete of St. Elias. Due to Turkish oppression, he was forced to leave the Holy Mountain, and with sixty-four of his brethren he came to Moldavia, Romania, where he organized an extensive translating center for distributing Patristic texts, which was crowned by the publication in 1793 (a year before his repose) of the Slavonic Philokalia, printed in Russia. At his death, he was the spiritual father of over 1000 monks. 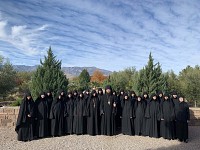 The sisterhood had its beginnings in the early 1990s, in northern California. In the year 2000 the sisterhood permanently settled in Arizona. The monastery’s catholicon is dedicated to the Dormition of the Theotokos. Within its walls are two side chapels; one is dedicated to St. Paisius and the Optina Elders; and the other, to the Holy Hierarchs John of San Francisco and Nikolai (Velimirovich). There are two additional chapels in the Monastery. The first, St. Anastasija Chapel, was consecrated in honor of St. Anastasija — wife of St. Stefan Nemanja and mother of St. Sava the Enlightener of Serbia, who together with his father founded Hilandar Monastery on Mount Athos. The second chapel is the Archangel Michael Chapel in the Monastery’s cemetery, where Memorial Services are conducted every Saturday.

To support themselves, the sisters publish books on the spiritual life, as well as numerous akathists with themes which support the Christian home and the struggles of Christians living in the world. They also make prayer ropes by hand, which are sold through the monastery’s online gift shop. The Abbess of the monastery is Nun Michaila. The monastery’s Chaplain is Archpriest David Brunton. The Divine Liturgy is served several times a week, along with the full cycle of church services.

Latest News
00000
Christmas Message from Patriarch KIRILL of Moscow and All Russia - 01/13/2023
00001
The XVI Annual Saint Herman’s West Youth Conference was Held in Youngtown, Arizona - 01/05/2023
00002
NATIVITY EPISTLE  of His Eminence NICHOLAS Metropolitan of Eastern America and New York First Hierarch of the Russian Orthodox Church Outside of Russia - 01/04/2023