On Sunday the 24th of September 2017 His Eminence presided over the patronal feast day of Saint Silouan Monastery in Sonora, CA.

Saint Silouan’s monastic community had worked hard at the preparations for this day even are far back as July when the monastery hosted a work week for the youth of the Western American Diocese. At that time yards and a fields were cleared, garden boxes and monastic cells were constructed, fences were painted and more. This work has continued right up to the feast day, including the preparation of organic fig jam, which came from fruit grown on the monastery grounds and which was sold on the day.

Blessed with mild weather the Feast Day itself passed with solemnity. Both the clergy and pilgrims from many of the parishes of Central California remarked on how joyous it had been. 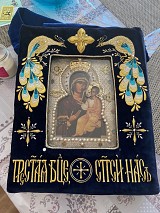