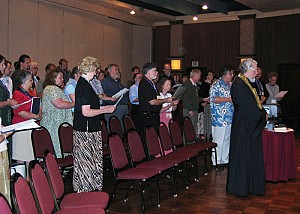 The 23rd Russian Orthodox Church Musicians’ Conference to be held from October 8 – 12, 2014, is announcing special rates and scheduled activities.

Thanks to a grant from the Russian American Women’s League, special rates for hotel registration, including $525.00 for double occupancy, extended through September 7!

Other rates are as follows: