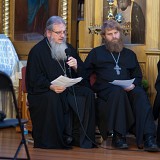 The afternoon of February 15, 2015, saw the close of the second spring 2015 weekend symposium put on by Saints Cyril and Athanasius Institute for Orthodox Studies. The theme for the spring 2015 symposia was “The City a Desert.” The first symposium, hosted by St. Andrew [Antochian] Orthodox Church in Riverside, CA, over the weekend of February 7-8, featured Metropolitan Joseph, Archimandrite Gerasim (Eliel), Archimandrite Irenei (Steenburg), Archpriest Joseph Trenham, and Priest Andrew Cuneo. The speakers at the symposium of February 14-15 held in San Francisco at the Old Cathedral at 864 Fulton Street were Dr. Christopher Veniamin, Hieromonk Alexii (Altschul) and Archimandrite Irenei (Steenburg), with Hieromonk James (Corazza) and Priest Phillip Halliwell joining the speakers for the Questions and Answers sessions and roundtable discussion.

Each of the speakers brought his knowledge and experience to bear on the overarching question of how those Christians who are living in the city might take inspiration from and emulate the example of the saints who had fled from the city to live in the desert. At the Riverside symposium, the emphasis was a bit more on the desert and its spiritual significance in the life of Christ as well as in the lives of the Hebrews in the Old Testament and of the saints who took to heart what was written in the New Testament. While in San Francisco, the focus of the speakers was not so much on the desert as on the life of the Orthodox Christian who is living in the world but has a yearning to follow Christ just as much as Saints Anthony and Marcarius of old, and Saint Paisios and Elder Sophrony in our own times. A sense of the elements of the spiritual life which were discussed can be gleaned from the titles of the talks:

Metropolitan Joseph: “Living the Christian Faith in a Secular Age”

Archimandrite Gerasim: “Bringing Forth Water from the Rock in the Wilderness”

Archpriest Josiah Trenham, Ph.D.: “Heaven as a City: This Life and the Next”

Archimandrite Irenei, Ph.D.: “A Desert Pilgrimage in the City: Guidance from the Desert Fathers”

Participants of the symposia included not only students of the Saints Cyril and Athanasius Institute and members of the respective parishes which hosted the event, but also clergy and parishioners from parishes of all Orthodox jurisdictions (and even a few Roman Catholics) from the greater area where each symposium was held.

At the beginning of each symposium weekend, Archimandrite Irenei exhorted attendees to come not merely for the sake of deeper intellectual knowledge of the Church, but to come away from these talks better Christians, better fitted to live the life in Christ.

Having attended both symposia and taken enough notes to fill a notebook, I came away with much knowledge and many impressions. Here, I share what rose to the top:

Christians are those who are intimately familiar with the entirety of the New Testament and not only know what it says but also understand how to follow the teachings of Christ in their day-to-day lives through acts filled with compassion and sympathy for their fellow human beings. We now live in a world where we are very connected electronically to far-flung friends and family, but we don’t even know the person who lives next door. We need to get to know our actual neighbor, even to the point of knowing when his or her birthday is. Our interactions with the people around us, whether it be our spouse, our children, our coworker, or the supermarket clerk, need to express humility and compassion.

Christians in the west have developed a reputation of chastising others for not following the edicts of our faith. We shouldn’t chastise without offering to suffer with those who are struggling with their sins. One who is truly in a state of repentance doesn’t see the sins of the other as his/her own sins fill the field of vision.

If we can remember to pray before every word, every action, and every thought, we will start on the path of living a life in Christ. If we don’t remember to pray every time, we should not despair or let our despair get in the way of doing so the next time. A prayer in the middle of an action is better than no prayer at all.

In addition to our prayer, we must make room in our lives for quietness and stillness, even if it is only for five minutes, because prayer and stillness proceed the clear vision of God.

For those who have been unable to attend the symposia or find their notes inadequate, Archimandrite Irenei has promised that after the 2016 symposia are complete, a CD containing all the talks given at the first five years of symposia will be produced to commemorate the 5th anniversary of the Institute.