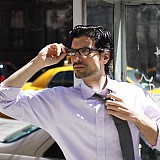 On Thursday the 24th of September, 2015, the famous “Men in Black” Series, sponsored by Saint Elias Church of Diamond Springs, CA, held its latest missionary event in the golden hills of El Dorado County.

Though not a “man in black”, we hosted Steve Christoforou to hear him share why he chose Christ. His answers were straight forward and compelling: he chose Christ for the same reason Gandhi rejected Him. He chose Christ because of pain, the very rationale from which so many deny the existence of God. Lastly, he didn’t choose Christ because He’s the best religious idea out there, but because of something far more personal. Steve talks to a largely adult crowd about why the hard choice to draw near to God was the best decision he’s ever made.

Geoff Brim of the "Men in Black" Series

Steve Christoforou is Director of Youth and Young Adult Ministries and the Office of Camping Ministries of the Greek Orthodox Archdiocese of America. He is a graduate of Yale University and the Fordham University School of Law. He practiced law for two years before commencing with seminary studies at Holy Cross Greek Orthodox School of Theology.

Steve Christoforou is perhaps best known for his weekly video series “Be the Bee,” (a series that helps viewers find God in everything, everyday). This Series is available on You Tube and Ancient Faith Radio.

"Why I Say Yes to Christ, When it is Easier to Say No."
Share This:
News Updates
Announcements