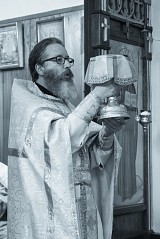 Priest Martin and Matushka Sarah Person came to Holy Protection Church in Hollywood, CA, a little over 13 years ago (2002). Father Martin was ordained as Deacon there in 2003, and became the priest for the early English Liturgies in 2006.

During his years of service in that community his duties included catechism and pastoral sessions on Saturday afternoons, serving Vigil in Slavonic and later introducing English Vigil services followed by spiritual discussions. After the English Liturgy, he would receive confessions during the later Slavonic Liturgy.

Father Martin expresses the following sentiments: "Leaving the Holy Protection Church and the many dear souls there has been both heart breaking and heartwarming. It is very difficult to leave, having shared so many joys and sorrows, but it is precisely this love and life in Christ that assures us we will remain close forever."

On Saturday November 7th, 2015, Father Martin will begin his new assignment at Saint Herman’s Church in Sunnyvale, CA. He and his wife, Matushka Sarah, were involved with St Herman's from its beginnings in the early 1980's and they are excited and grateful to be “coming home” in a sense to this wonderful parish community.