On Saturday September 24, 2016, the fathers and pilgrims marked the first anniversary of the founding Saint Silouan’s Monastery in Sonora, CA.

His Eminence KYRILL Archbishop of San Francisco and Western America presided over the patronal feast of the monastery.

Before the All-night Vigil on Friday September 23, His Eminence preformed a panykhida for the ever-memorable Archbishop Anthony (Medvedev, + 2000) on the 16th Anniversary of his repose. The abbot of the monastery, Bishop-elect of Sacramento Archimandrite Irenei, and Priest Philip Plowman concelebrated the All-night Vigil with Archbishop Kyrill.

On the following day Archbishop Kyrill presided over the Divine Liturgy, guest clergy concelebrating with him. During the Hours, one of the fathers of the monastery, monk Ignatius, was elevated to the office of sub-deacon.

After Divine Liturgy, Bishop-elect Archimandrite Irenei lead the cross procession around the church. The communities of Holy Ascension Church in Sacramento and Saint Elias Church of Diamond Springs, CA, along with other supporters of the monastery helped to provide the many clergy and pilgrims with food and hospitality.

In the afternoon, Mother Nature, perhaps at the behest of the blessed patron of the sacred monastery of St. Silouan, brought a gentle swarm of dragonflies teaming around the grounds signaling nature’s joy at man’s repentance. 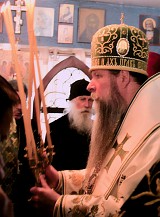