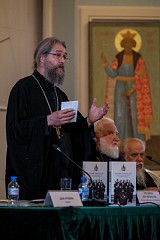 On September 19, 2017, the main building of the St Tikhon Humanitarian University in Moscow hosted an evening marking the 10th anniversary of the reestablishment of unity between two parts of the Russian Church—in Russia and in the diaspora—the signing of the Act of Canonical Communion. The event included the presentation of a new Russian-language book compiled by Protopriest Peter Perekrestov: Pastyr. Uchitel’. Drug. Svjatitel’ Ioann Shanghaiskij i San-Fransisskij v vospominanijakh sovremennikov [Pastor. Teacher. Friend. St John of Shanghai and San Francisco as Remembered by Contemporaries]. Attending the event were clergymen and students of the university as well as a multitude of venerators of St John.

According to Bishop Panteleimon, events were put in motion 100 years ago which brought great destruction to Russia, to the Russian people and culture. “These events resounded throughout the world, and led to terrible consequences. One of these was the division of the Russian Church, which came to an end 10 years ago, which is of course a great victory of love, this recovery of unity, which we are all in need of. This is an example for us all that we must unite in goodness, in love, and only then can we resist evil which confounds and tempts us. Today we remember this event with joy and gratitude,” noted Vladyka Panteleimon.

Protopriest Vladimir Vorobiev, the Rector of the STHU, noted that we must thank God that He gave us two hierarchs, Patriarch Alexy II and Metropolitan Laurus, who manifested the unification of the two parts of the Church. “It is difficult to overstate the importance of this event. The Russian Church recovered its wholeness: Russian people throughout the world united in one Church,” he said. “After the signing of the Act, Metropolitan Laurus would visit our university, he met with professors and students and told them about the life of the Russian Church in the diaspora,” he recalled.

According to Fr Vladimir, the tenth anniversary of the signing of the Act is an occasion of global importance: “This was not simply the unification of two large ecclesiastical structures, it is a victory of love, a triumph of faith. This is a victory of the Church over the tribulations of the 20th century, over the evil intentions of mankind. Throughout various epochs and in various nations, the powers that be have tried to control the Church, to meddle in her affairs. And so the atheist state, burning with animosity for the Church, was able to divide us through coercion, through persecution. They strove to force all Orthodox Christians driven from their Homeland, clergymen and laity alike, from the Church, but they only succeeded in separating them from Eucharistic communion,” said Fr Vladimir. “This division oppressed many generations, and brought great suffering. The Church suffered the wound of separation, and the wickedness of the world, like a disease, darkened her life. By Divine mercy, ten years ago, this wound was healed. The Church recovered her unity, fullness, and peace.”

“Even now we don’t fully grasp the importance of this event. The largest things are best measured from afar, we need time to make a proper evaluation. I think that this time will come, and that the significance of this Act will be properly appreciated,” added Fr Vladimir.

Protopriest Andrei Lobashinsky, Dean of Maloyaroslavets and teacher at Kaluga Theological Seminary, spoke on the importance of the Russian Church Abroad and St John for today’s Russia. The degree to which St John is venerated in Russia is a remarkable phenomenon, he said. It would seem strange that a bishop who served in China and America is revered in Russia. The answer to this question, according to Fr Andrei, is that the New Martyrs died at the hands of executioners, while Bishop John, living in China, sympathized with them, for he shared their spirit. His service abroad showed how the service of pastors in Russia could have blossomed had they not suffered persecution. “Through the podvig of St John, we see the light of perpetual sanctity flowing from the time of the ancient Christians,” concluded Fr Andrei.

Fr Peter Perekrestov, Senior Priest at the Cathedral of the Mother of God “Joy of All Who Sorrow” in San Francisco, which contains the relics of St John, then presented his new book. It is the only book published in 2017 which is dedicated to the 10th anniversary of the reestablishment of unity within the Russian Church.

Fr Peter pointed out that this evening’s event is taking place in a hall where 100 years ago, the All-Russian Pomestny Sobor [National Council] of the Russian Orthodox Church took place, which decided to restore the patriarchy, where His Holiness Patriarch Tikhon was elected. One might ask what the connection is between St John, the Pomestny Sobor and Patriarch Tikhon. In fact, St John was the spiritual son of the man who had received the most votes for the office of Patriarch at that Council, Archbishop (later Metropolitan) Anthony (Khrapovitsky), but he was also a successor to Archbishop Tikhon (Belavin), future Patriarch, on the Cathedra of Western America. Many do not know that the future Patriarch was given honorary citizenship in the United States.

Fr Peter then remembered how in 1988, Protopresbyter Alexander Kiselev called him to propose that he travel to Kiev for the celebration of the 1000th anniversary of the Baptism of Rus. Concelebration between hierarchs from the two parts of the Church in principal could have taken place, but it would have been purely formal. For unity to be genuine, it needed to be prayed and suffered for, representatives of the two churches needed to accept each other, forgive each other, humble themselves. This was a process that would take time and reflection. Fr Peter noted that the reestablishment of unity within the Russian Orthodox Church was unprecedented in history. It had happened before that a part of the Church that broke away came back. But in this case, two parts of a Church, equal in importance but separated, after 80 years of division, reunited. This was truly a mystery, one which reflects the Mystery of matrimony.

Fr Peter then talked about his book: “When I decided to compile this book, miracles began to occur. Someone in Paris sent me unpublished letters of Vladyka John. Eyewitness accounts revealing new facts about his life started to reach me. For instance, a Macedonian seminarian in Bitol, where then-Hieromonk John taught, remembered how the saint would sleep: he would write letters at his desk for a long time, then, when he could no longer stave off sleep, he would put his head on his desk for 15 minutes, and when he woke he would continue writing,” said Fr Peter. “When I edited the last version of my book, I understood that maybe I am writing this book not for others but for myself. It is instructive as to how a true clergymen must live—I hope that the publication of this book helps to cover at least some of my sins and weaknesses.”

The actress Dana Agisheva then recited two passages from the new book and showed unique video clips of the service of St John in America and his canonization services in 1994.

Fr Vladimir then concluded: “Our university is hosting the presentation of this book, in this Council hall we sang the troparion to St John, this very holy place where the podvig of our New Martyrs began. In 1917, the delegates of the Pomestny Sobor emerged from this hall to begin their sufferings for Christ, and served as an example to the entire Russian Church how one must stand firm in faith to the end. St John also stood firmly in his faith until his death, but on the opposite side of the world. There were no persecutions there, but he fought evil and was a great ascetic. Asceticism means the mortification of the flesh. This holiness of St John unites him with the holiness of the New Martyrs, and unites our Churches.”

“Eternal Memory” was then sung for Patriarch Alexy II and Metropolitan Laurus.