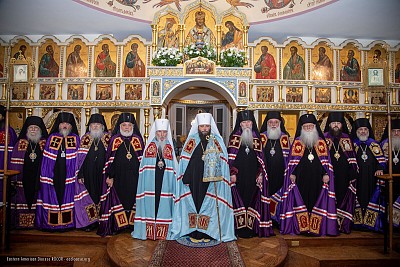 On Tuesday, 13 September, 2022, the members of the Council of Bishops of the Russian Orthodox Church Outside of Russia, led by His Eminence Metropolitan Mark of Berlin and Germany, celebrated Divine Liturgy at the Synodal Cathedral of Our Lady “of the Sign” in New York City. At the end of divine services, the archpastors performed a moleben for the opening of the Council, invoking the Holy Spirit to help in their work.

After a trapeza luncheon in the large hall of the Synodal Residence, the Council of Bishops opened. During his keynote address, Metropolitan Mark noted: “In very difficult circumstances, we must proceed to elect a new First Hierarch. We are in need of a calm hand to steer the ship of our Church in a storm-tossed sea. For this we require first of all genuine collegiality, through which, after exhaustive deliberation, we will make decisions in the spirit of conciliarity.” Archbishop Kyrill was then elected Vice Chairman, and elected as Secretaries of the Council were Bishop Nicholas, Bishop Theodosius and Bishop Job. Elected as members of the Counting Committee were Bishop Irenei and Bishop Luke.

Then, after commemorating the reposed Primates of the Russian Church Abroad in the Cathedral, the hierarchs commenced electing a new First Hierarch. First to vote was Metropolitan Mark, followed by the other members of the Council of Bishops. Having heard the second round of voting, the archpastors exclaimed “Axios” [“he is worthy”] for Bishop Nicholas, after which litanies “for our Master Bishop Nicholas, Elected Primate of the Russian Church Abroad,” followed by the singing of “Many Years.”

After receiving the congratulations of his brethren bishops, the newly-elected First Hierarch of the Russian Orthodox Church Outside of Russia expressed his gratitude for the trust which he hopes, with Divine aid, he will justify in carrying out his service.

Returning to the meeting hall, at the suggestion of Bishop Nicholas, the archpastors unanimously appointed Metropolitan Mark the Vice Chairman.

Then, hearing reports by the Ruling Bishops of the Eastern American, German and Western American Dioceses and deliberating upon them, the archpastors concluded their first day of work.

On Wednesday, 14 September, the participants of the Council of Bishops heard reports by the Ruling Bishops of the Canadian, Mid-American, Great Britain and Western European Dioceses. The bishops then heard a report by Bishop Irenei, Secretary of the Synodal Inter-Orthodox Relations Department on affairs in the Orthodox world since the last Council. He initiated serious and thoughtful dialog on the joys and concerns in the life of the Church of Christ.

On Thursday, 15 September, the third day of the Council, the bishops met at the New Kursk-Root Hermitage of the Mother of God in Mahopac, NY, formerly a metochion of the Synod of Bishops, where they were warmly greeted by His Grace Bishop Jerome (Shaw) and Priest George Temidis, Parish Rector. Venerating the church’s holy relics, the members of the Council of Bishops continued their work in the parish hall. After the morning session, the bishops were treated to a splendid luncheon by the parish sisterhood. The hierarchs and their delegates then toured the grounds of the Hermitage along with its cemetery, where among others Archbishop Seraphim (Ivanov), who died 35 years ago, is interred. In the afternoon, the archpastors discussed matters pertaining to the various Synodal departments and stavropighial parishes [those directly subject to the President of the Synod of Bishops].

On Friday, 16 September, the Council of Bishops adopted the text of a letter to His Highness King Charles III, after which a lengthy discussion followed based on the report of Bishop Irenei. On the day, the Council established two committees: one to study the question of the canonical reception of former schismatics, another to analyze and formulate the Church’s approach to bio-ethics and radical ideologies in the contemporary world. Metropolitan Mark, Bishop Irenei, Bishop Job and Bishop Jerome were included in the first, and appointed as members of the second committee were Bishop Irenei, Bishop Luke and Bishop Job.

After a report by Archimandrite Roman (Krassovsky), Chief of the Russian Ecclesiastical Mission in Jerusalem of the Russian Church Abroad, the Council expressed its concern for the lack of health insurance for the monastics in the Holy Land, advising Fr Roman to appeal to the Fund for Assistance to the Russian Orthodox Church Outside of Russia to help, and to call for the abbesses of the convents to take up the matter with their corresponding monastic councils.

On the same day, the Council of Bishops heard a report by Archpriest Pimen Simon, Rector of the Old-Rite Community of the Nativity of Christ in Erie, PA. Fr Pimen informed the Council of the life of his parish, his publishing efforts and the possibility of opening new Old-Rite communities in North America.

On Saturday, 17 September, the fifth day of the Council, the bishops discussed the capital renovation of the Synodal Residence in New York, and also youth ministry on both Church-wide and diocesan bases. Archpriest Andrei Sommer, Dean of the Synodal Cathedral, reported on his work with youth. The Council also heard with great interest the report of Archbishop Peter on the traditions of divine services as developed within the Russian Church Abroad. Concluding the day, the Council of Bishops determined the composition of the Synod of Bishops, which will include Metropolitan Mark, Vice President, Archbishop Kyrill, Second Vice President and Secretary, Archbishop Gabriel, Archbishop Peter and Bishop Irenei. Bishop Theodosius and Bishop Job were elected auxiliary members of the Synod of Bishops.

On Monday, 19 September, the Council of Bishops heard reports by Professor Nicolas Schidlovsky, Dean of Holy Trinity Seminary in Jordanville, NY, Archpriest Victor Potapov, Board member of the Fund for Assistance to the Russian Orthodox Church Outside of Russia and Rector of St John the Baptist Cathedral in Washington, DC. Fr Victor began his report by congratulating His Eminence Metropolitan Nicholas on his election as First Hierarch, and gave him a panaghia as a gift from the Fund for Assistance, and from himself personally, an ancient icon of St Nicholas the Miracle-Worker, the heavenly patron of the First Hierarch when he was baptized.

Expressing gratitude to those who reported, the Council of Bishops then carefully heard a presentation of Protodeacon Andrei Psarev devoted to the 100-year history of the Russian Church Abroad. In delivering his historical overview of the centennial of ROCOR, Fr Andrei discussed the state of affairs today with regard to pastoral ministry, the interpretation of Holy Canons during various periods, and the present and future of the Church. Fr Andrei then shared his thoughts on the activization of the struggle against the secularization of society and the strengthening of cooperative work among the laity.

On Tuesday, 20 September, the Council of Bishops adopted the texts of its official Epistle and of other documents, and of decrees of blessing to parishes celebrating their anniversaries this year.

The Council of Bishops concluded with Divine Liturgy on the feast of the Nativity of the Nativity of the Most-Holy Mother of God. Most of the archpastors, headed by His Eminence Metropolitan Nicholas, participated in all-night vigil and Liturgy in the Synodal Cathedral. Other archpastors traveled to Holy Trinity Monastery in Jordanville, NY, the New Kursk-Root Hermitage, and other local parishes of the Eastern American Diocese for divine services.